Eulogy for My Mom 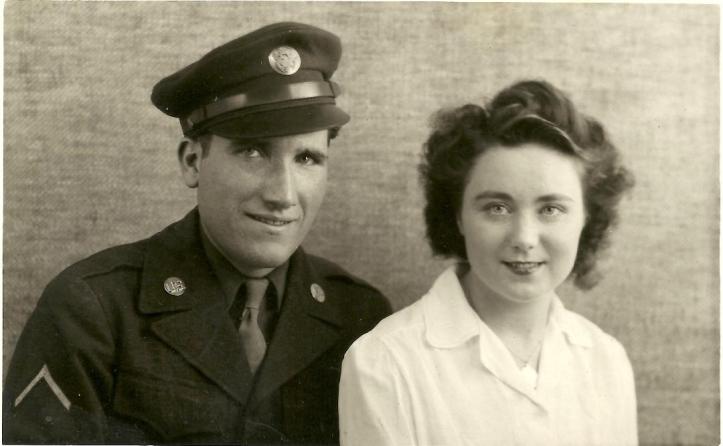 Things You May Not Have Known About Our Mom

Our mom was born in 1921 in the midlands of England.
Oh – she was really Irish, not English. Her parents were born and raised in Ireland. Her father was in the Irish army and followed his captain into the English Army.
She grew up Catholic in what was still a pretty anti-Catholic England.

She didn’t really remember her father. He died when she was 4, from having been gassed during WWI.
She lost her mom at 18, which devastated her.

She lived through WW II in England. She had to go into air-raid shelters almost nightly some periods during the war, hanging out with neighbors: some nice, some not so nice.
Then she lost 2 brothers in the war, one of them her favorite. Devastated again.

Our mom met our father when he was stationed in England. She was engaged to another American solder at the time. Her family loved George the Italian Catholic from Brooklyn, better than the Protestant. My father really was a dear, sweet man.

My father’s family sent one of the brothers, our Uncle Mike, to stop the wedding. I guess they either thought he was too young (20) or she wasn’t Italian. But he was too late.
So my mom picked up and left her home and family and came by ship as a war bride to Brooklyn NY. She LOVED my father’s family, and they adored her back.
But, she hated the city! She told my father, under no circumstances was she raising her children in Brooklyn. She knew what she wanted then, and she knew what she wanted until the very end. (Just ask her aids – God forbid you didn’t make her tea with 2 sugars, 1 sweetnlow, a little milk, and hot!)
So anyway, we were born and raised in a small town on Long Island. THANK YOU MOM. We loved growing up  there, near the water, with a small town country vibe. We were not rich, but we had a great life.

She was a beach bum – we have wonderful memories of the summer, at the beach, the pool, the lake. Never left Long Island as kids, but had a great time. Thank you Mom.

She never really worked outside the home. She wanted to be there for us, because her mother couldn’t be home for her; she had to support 7 children after her husband died. We got to walk home from school for lunch. I still remember the grilled cheese and tomato soup; it was so comforting. Thank you, Mom.

Very active in her church, but her real ministry was, she drove everybody everywhere. Doctor’s appointments, food shopping, etc. Her friends who didn’t drive depended on her! Some of them 10 years younger than her who decided they were too old to drive.
One of them even nominated her for woman of the year!
She set an excellent example for us. Thank you Mom.

She hung her clothes out to dry as long a she was still doing her own laundry. (THAT we aren’t doing.)

She was a voracious reader- we used to play the Readers Digest vocabulary game every issue. When she was pretty much home bound, my sister would faithfully bring her her dose of library books. Thank you Sis, for all the countless other things, and Jim’s, in loving care of Mother.

She drove until she was 95, and she drove fast! My daughter asked, hey Nanny, why do you drive so fast? Her answer was – because I don’t have a lot of time left!

She was a good mother right up to the end- worried whether we were tired or hungry. We would be worrying about her and she would tell us to go home.

Besides her earlier losses in life, she had to endure her son going to Vietnam in 69.
Her husband died when she was only 62.
Then she lost her son, our brother Tony, when he was only 51. Each time she was completely devastated.

So… she didn’t have an easy life emotionally.

In spite of all her losses, our mother was a cheerful person. The staff at the rehab center LOVED HER. They all would tell us, that she was their favorite, even though her failing kidneys made her belligerent at times. When she was lucid she was always cheerful and polite. They loved her accent and they loved her.

Now I want to tell you about the most important aspect of our mom. She was a deeply spiritual person. Her favorite thing in the whole world to do was to go and praise the Lord at her prayer group. Her faith was her anchor, her fortress, her joy, and her peace.
I know she would love you to share that with her. She loved God. Jesus was her Lord and Savior.

I hate death.
All the cards that say that her memories will keep her alive- – and if you sent me one like that, please don’t feel bad, I send them too – but it seems so empty and meaningless to me. It doesn’t seem like she’s still alive. I want to ask her questions and hear her answer me. I’m going through the pictures and I want to ask, who’s this, and who’s that, what was going on here, and I can’t ask her. I want her here, right beside me.

My sister-in-law sent me a text yesterday morning, about the faith that we share with Mother.
She said, “No other religion promises new bodies, hearts, and minds. Only in the gospel of Christ do hurting people find such incredible hope.” Yes. Thank God. I know where she is. I will join her someday.

Do this for our mom if you are not a believer: see the movie A Case for Christ. It’s free on Netflix. See for yourself, if He is Who He says He is. It’s well done and not boring; it will at least make you think.